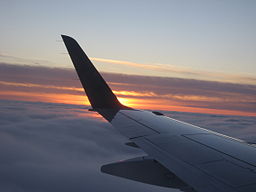 1. NASA hopes to cut back airline fuel emissions with a bug-repellant coating

NASA is looking everywhere for ways to improve fuel efficiency. Two of its most promising projects - a bug-repellant coating and a new technology for smaller vertical tails - are now ready to be tested in the real world.

Bugs splattered across the surface of a commercial jet might seem pretty insignificant, but NASA researchers say they can decrease fuel efficiency by as much as six percent. When those dead bugs collect on aerodynamically -sensitive elements they disturb the airflow over the surface. That causes turbulent air and drag - which ultimately reduces efficiency.

NASA is also testing a novel way to cut down the size of the vertical tail on commercial airliners - reducing weight and fuel use in the process. The only reason the tails are so large is to assist with airplane stability at low speeds during landing and take off.

2. Samsung said to win Apple A9 Chip orders for next iPhone

Winning this order from Apple will help the world's second-largest chipmaker rebound against TSMC, which last year ended Samsung's monopoly over contracts to make iPhone and iPad chips.

Apple's decision to turn back to the rival for supply of crucial components may vindicate Samsung's investments in trying to grab the lead in manufacturing technology. Apple spent $25.8 billion on chips last year, accounting for 7.6 percent of industry purchases. Supplying chips for the iPhone and its own S6 smartphone will help Samsung turn its non-memory semiconductor business from a 1 trillion won ($914 million) loss last year to a 1 trillion won gain, said Song of HI Investment.

3. Slack confirmed up to 500,000 users personal info has been leaked by hackers

The leaked information includes phone numbers, email ID's and Skype IDs that users have used to login or added to their profiles.

"We have been recently capable to confirm that there was unauthorized access to Slack database storing profile data."

Slack VP of policy and compliance strategy Anne Toth mentioned that the attack continued during a four-day period in February, exposing the database. However, sensitive payment or card information was not leaked during the attack. Messages and team communications were exposed for some users. Toth added that hackers could not decrypt the hashed passwords though users with weak passwords were notified to reset their login information.

Earlier this year, we noted that famed copyright trolling operation Perfect 10 had lost big time in its lawsuit against Giganews. erfect 10 is a copyright trolling operation that pretends to be a pornographic magazine publisher, but whose main line of business has long been threatening online platforms to pay up linking to or hosting some of its content that users uploaded.

And now we can add Perfect 10 v. Giganews to the list with a great final act: the judge in the case has ordered Perfect 10 to pay up $5.6 million in attorneys' fees for filing such a ridiculous lawsuit. The evidence before the Court also demonstrates Perfect 10 continued that pattern in this litigation, which, as the Court previously noted, has been inconsistent with that of a plaintiff interested in actually protecting its copyrights from unauthorized use.

5. Uber will pay for taxi licenses to keep operating in Germany

Uber is only willing to bend German law so far, it seems. The ride sharing outfit tells Wirtschafts Woche that it'll get around a court-ordered ban on its unlicensed services (such as UberX) by creating a new service that both pays for the drivers' taxi licenses and registers them as companies.

Uber will pay for taxi licenses

Legal troubles are nothing new for Uber at this point, whether it's safety conduct or the employment status of its drivers, we see it again and again in country after country. But after getting banned in Germany, for a second time, a little over a week ago, the company has decided it needs to follow the rules. In order to get around the recent court-ordered ban, Uber will pay the government fees needed for its German drivers to receive taxi licenses.

However, commercial licenses are often expensive, said to cost between 100 and 200 euros (US$109 to $218), and company registrations from 150 to 200 euros. It hasn't been made clear yet how the prices for riders will be affected, but it's probably safe to bet they won't be going down

Pebble Time and Pebble Time Steel, the all new Pebble watches which were launched on Kickstarter on the previous month finished recently. The Pebble Time crowd funding campaign closed with around $20.3 million being the final standing.

Double amount vs previous model in 2012

The current amount gathered in the campaign for new Pebble Time is almost double the amount they raised for their original Pebble watch in the year 2012.

Pebble Time is somewhat like a perfect blend of normal watches and smartwatches. It does not lean much on either side and offers the basic features that one would require from such kind of watch. It features a whooping seven day battery life, color e-ink display, waterproof capabilities and a thinner body.

The retail price of the Pebble Time is going to be $199. However, it was available just for $179 during the Kickstarter crowd funding campaign.

LIQUID METAL MACHINES have been developed by Chinese scientists that can 'eat' substances to change form.

"The biomimetic mollusk is highly self-adaptive and closely conforms to the geometrical space it is in," scientists wrote.

Researchers from the Technical Institute of Physics and Chemistry at the Chinese Academy of Sciences and the medical school of Tsinghua University found a liquid metal can "eat" substances and then propel itself like a self-fueled motor. The finding, which may pave the way for the development of a liquid metal robot, was published in the Advanced Materials journal.

The power of the liquid metal motor comes from the endogenous electric field of liquid alloys and metal "food," and the hydrogen generated by the electrochemical reactions.

Based on the theory, researchers have developed several liquid metal machines that can move in alkalescent, acidic or neutral electrolytes.

8. Facebook tracks all visitors, even if you're not a user and opted out

Facebook tracks the Web-browsing activities of all visitors to the facebook.com domain even if they are not a Facebook user, according to new research from Europe. The report updates work from earlier this year, which found that Facebook's updated privacy policy breached EU law.

The research has been commissioned by the Belgian data protection agency, which is investigating Facebook. It was a collaboration between the Interdisciplinary Centre for Law and ICT/Centre for Intellectual Property Rights (ICRI/CIR) at the University of Leuven and the Department of Studies on Media, Information, and Telecommunication (SMIT) of the Vrije Universiteit Brussels.

This newly found tracking, used to provide targeted advertising, is carried out through Facebook's social widget, the Like Button. Cookie is placed in the browser when someone visits any page in the facebook.com domain, including sections that do not require an account. For visitors that are not Facebook users, the cookie contains a unique identifier, and it has an expiration date of two years.

Opt out not helping at all

The researchers went on to investigate to what extent Facebook's opt-out mechanism allowed people to avoid this tracking. They found that when a Facebook user opts out, Facebook promises to stop collecting browsing information, or use it only specifically for the purpose of showing advertisements. The site continues to track its users when they visit a webpage containing a Facebook social widget even after the user opts out.

More than a quarter of Americans cannot go online at home to check their children's grades at school, apply for jobs, pay bills or research health issues. They don't have what has become a crucial service for participation in modern society: Internet service at home.

One reason? The high cost of broadband and the lack of competition that leads to those high prices.

A Center for Public Integrity analysis of Internet prices in five U.S. cities and five comparable French cities found that prices in the U.S. were as much as 3 1/2 times higher than those in France for similar service.

By mapping the service areas of U.S. providers, The Center for Public Integrity also found that telecommunications companies appear to carve up territory to avoid competing with more than one other provider

German scientists demonstrate a breakthrough in the science of using DNA as a programmable building material for nanometer-scale structures and machines.

The field popularly known as "DNA origami," in reference to the traditional Japanese art of paper folding, is advancing quickly toward practical applications, according to Technische UniversitÃ¤t MÃ¼nchen Prof. Hendrik Dietz. Earlier this month, Dietz was awarded Germany's most important research award, the Gottfried Wilhelm Leibniz Prize, for his role in this progress.

In recent years, Dietz and his team have been responsible for major steps in the direction of applications: experimental devices including a synthetic membrane channel made from DNA; discoveries that cut the time needed for self-assembly processes from a week to a few hours and enable yields approaching 100%; proof that extremely complex structures can be assembled, as designed, with subnanometer precision.

To enable a wider range of DNA nanomachines with moving parts and potentially useful capabilities, the team adapted two more techniques from nature's biomolecular toolkit: the way proteins use shape complementarit**y to simplify docking with other molecules, and their **tendency to form relatively weak bonds that can be readily broken when no longer needed.

Recent studies confirm the rapid transformation of IT: 40% of companies in Germany use cloud computing, 24% of the IT budget is on average spent on private cloud solutions, 83% of the private cloud users and 67% of the public cloud users have had positive experiences with the cloud.

Immerse yourself in the world of big data at Strata + Hadoop World.

Explore solutions to your most challenging problems, connect with the brightest minds in data, find out what's new in emerging technologies and Apache Hadoop - and see for yourself what data can do.